The Cubs ownership hasn't brought us a championship since 1908.  Harper Scott's solution?  We fans buy the team and run things the way they should be run.


Fact: There are 20 million Cubs fans in the civilized world.  And a lot more if you include Chicago.

Fact: If one out of every forty Cubs fans chipped in $2000, we'd have a billion dollars.

Fact: Not even the Cubs ownership is stupid enough to turn down a billion dollars.

Ah, but if we spend our billion dollars buying the team, where do we get the money to hire free agents?

It's easy.  Instead of paying one manager millions of dollars to sit in the dugout and watch the game, we have a different manager for every game, and the managers pay us!  For 3 million dollars, you get to manage a game in Wrigley.  For 1 million you get a road game.  Superstars who love the Cubs, like Bill Murray and John Cusack would jump at the chance.  Even mediocre talents like Jim Belushi and Vince Vaughn can afford it.  Hell, if millionaires will pay 20 million to be shot into space, they'll be lining up to manage the Cubs.

You get to vote, via the Internet, on all team decisions.  You help decide whether the Cubs should go after Johnny Damon.  You vote on whether "Take Me Out to the Ball Game" should be sung by Paris Hilton or Carmelo Anthony.  When a fan runs onto the field, you instantly give your input on whether he should be arrested, shot, or left in the game at shortstop.  You control everything.

That's the best part.  You send nothing now.  Merely go to the "Contact Harper Scott" page and email your $2000 pledge.  As soon as we have half a million pledges, we'll set up an account and you may then wire the money.  (Millionaire aspiring managers should pay now, to lock in the opponent you wish to manage against--first come first served.  Don't get stuck with Kansas City!)

This could be the best thing to happen to the Cubs since 1908.  Be a part of it.  And remember, GO CUBS! 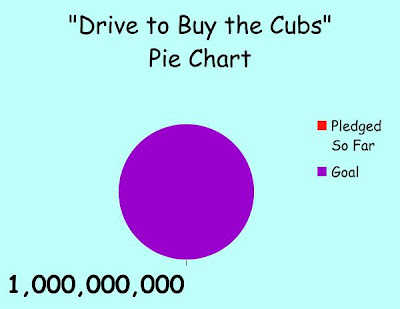 Money sent by millionaire aspiring managers is non-refundable in the unlikely event that the Harper Scott "Drive to Buy the Cubs" Fund fails to reach its goal of one billion dollars.