Harper Scott was born in late 21st-century Chicago. After an unspectacular childhood, he transported to the Toledan System aboard a corporate laser ship. Upon his return to this solar system, he joined Doctor Alexander Proo in experiencing the time travel adventure described in his memoir, How I Helped the Chicago Cubs (Finally!) Win the World Series.

Today, Scott lives in Chicago with his wife, Jennifer, his son Stephen, and their dog, Perry. He has never been asked to sing "Take Me Out to the Ball Game" over the public address system at Wrigley Field during the seventh-inning stretch. 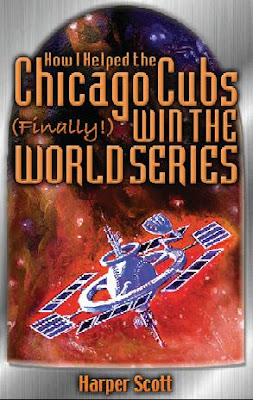 "Harper Scott has a light touch with his prose, knows more about the Cubs than any person probably should, and writes screwball, bantering dialogue as though he was channeling the best of the scriptwriters for old movies like His Girl Friday."-The Magazine of Fantasy and Science Fiction

Link to the full review in Fantasy and Science Fiction

Link to the book's description and review comments
Posted by Evil Editor at 7:50 PM